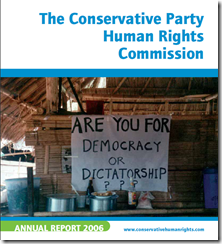 The cover of the first ever Conservative Human Rights Commission report, produced whilst David Cameron was leader of the opposition, bore a striking picture. It showed a banner hanging in a Burmese Internally Displaced Persons camp, bearing the words “ARE YOU FOR DEMOCRACY OR DICATORSHIP???”

Last week the Prime Minister may have been asking himself exactly the same question.

As the first British Premier to set foot Burma for over sixty years, he built on the marked success of his Foreign Secretary William Hague and other international visitors, not least Hilary Clinton, in helping to keep Thein Sein’s government on its reformist path.

The tactical suspension of sanctions, warmly welcomed by Aung San Suu Kyi as she stood alongside Cameron, simultaneously rewards the President for his progress whilst maintaining the threat of renewed economic isolation should hardliners seek to impede further liberalisation.

The Prime Minister also made a thoroughly welcome move by inviting Suu Kyi to London in June, for what would be her first trip out of Burma since she returned from England in 1988. Until now the iconic democracy leader has been unable to leave, at risk of not being allowed to re-enter her country. However, in the current climate Cameron’s offer could provide a long overdue opportunity for Suu Kyi to take her inspirational politics abroad; and if all goes smoothly, her free movement could increase the growing trust between the opposition and government.

Yet immediately before this brave democratic politicking in Burma, Cameron was in Indonesia playing an altogether different game. His shocking call for the renewal of arms sales to Susilo Bambang Yudhoyono’s despotic government drew headlines from around the world, in light of the well documented human rights abuses in occupied West Papua and Indonesia itself. Perhaps even more outrageous however, were the flagrant misrepresentations and downright lies that the Prime Minister sought the sell the world in a desperate bid to justify his push for British commercial contracts.

Audaciously Cameron claimed that Indonesia is a society which ”neither 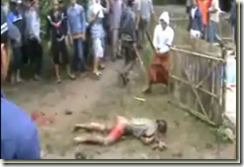 compromises people's security nor their ability to practise their religion" ignoring the fact that Ahmadiyah Muslims are prohibited from publicly worshipping and viciously beaten to death by mobs who subsequently walk free with impunity.

As if to rub salt in the wounds, he went on to hold the state up as an inspiration for others to aspire towards, casually overlooking the army’s taste for burning and executing dissidents. If nothing else, such nonsensical attestations marked a tragic end to the optimism with which the Papuan people greeted his election two years ago, hoping that unlike previous British leaders he would take a stand against the occupation of their land and slaughter of their countrymen.

Overall the paradoxical diplomacy presented by these two trips may not be surprising. No one doubts that Cameron’s government admires Suu Kyi, supports the NLD and wishes to see reform in Burma, but at the same time it is consistently clear that any underlying universal democratic tendencies are in strict competition with British business interests; even when that means currying favour in Indonesia by publicly defending what is clearly one of Asia’s most intolerant and authoritarian societies. So is Cameron for democracy or dictatorship? That depends on the price. 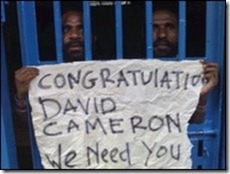