Time to get behind the Free Syrian Army

With an attempted UN resolution recklessly de-railed by Russia and China, government shelling of Homs intensifying by the day and civilian casualties mounting at an alarming rate, it is clearer than ever the time for diplomacy in Syria has long since passed.

Uncomfortable as it may be to certain groups and individuals around the world, the fact remains that only force now providing any semblance of protection against Assad’s tanks and rockets, is the Free Syrian Army (FSA), whose members – a mix of armed civilians and military deserters- are laying their lives on the line in a fight that is as one-sided as it is brutal.

As sanctions, transition plans and even statements of condemnation are constantly blocked and watered down, whilst the slaughter continues, these are the men to whom states throughout the international community should now lend their support.

Of course, the prospect of backing the rebels will naturally cause concern for some, on all sides of the political spectrum, and understandably so.  The complex political and sectarian tensions in Syria mean that injecting weaponry into the country is a very unattractive long-term prospect.  And even now the FSA remains a “loose collection of opportunists” rather than a completely coherent force, meaning little if any guaranteed control over how such arms will be put to use.

However, supporting the FSA does not have to mean a ‘Charlie Wilson style’ surge of guns, bombs and ammunition.  The resistance 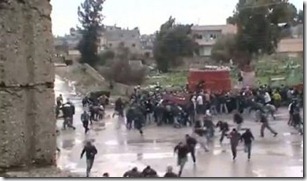 fighters could similarly benefit from supplies including medical kits, body armour and communication equipment – all of which would assist in their struggle to halt the killing and bring down Assad, without exacerbating the potential for instability and abuse further down the line.  There is also the possibility of supplying vehicles and fuel through FSA-controlled border towns, such as Zabadani; as well as food, medicines and other humanitarian relief for distribution to the civilian populations who have been affected by government attacks.

Some will rebuke even these ideas on the grounds that they may lead to similar international involvement from Assad’s allies, thus escalating the situation.  Yet this is both naive and fallacious: the Russian government was providing his regime with military equipment and diplomatic backing long before the FSA even existed.  Besides, nearby states including Qatar and Turkey are already arming and training the rebels; so for the likes of Europe or America to step in with practical and essential supplies would ultimately make little political difference, whilst having a potentially significant impact on the ground.

Ultimately there is no other feasible choice remaining, except for more empty words as the mass burials become a nightly occurrence and the rampant torture spirals further out of control.  In 1982 Hafez al-Assad had 20 000 butchered in the restive city of Hama; his son’s latest massacres are eerily reminiscent, and right now the Free Syrian Army is the only thing standing in his way. 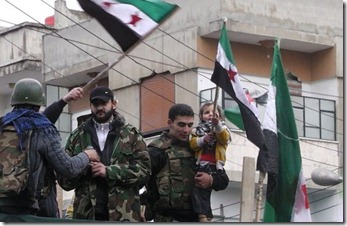